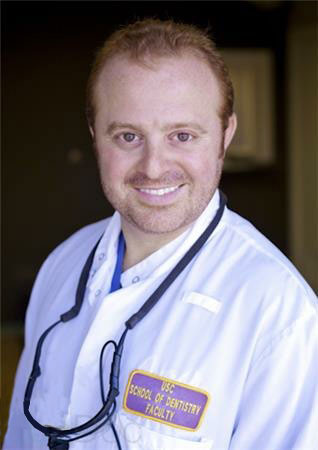 Dr. Mastour is equally committed to both his practice and his role as an educator and has received the Curriculum Award for Excellence in Teaching

from the University of Southern California. He continues to keep informed of the latest innovations in dentistry, and has had his research findings published in Dental Economics and Compendium Dentistry (due for release in December 2007), Dental Office (May/June 2007) and Compendium Magazine (August 2007).

After graduating in 1996 with a Bachelor’s degree in Biology from California State University Northridge (CSUN), Dr. Sabbagh-Fard attended the prestigious New York University School of Dentistry, where he was a member of an accelerated program before graduating in 2000 with a Doctorate of Dental Surgery. Dr. Sabbagh-Fard also performed a three month residency at Mount Sinai hospital before starting his own practice. Dr. Sabbagh- Fard has been living in and serving the community of Culver City since 1990, when he began taking undergraduate courses at West LA College, so he takes pride in serving the Culver City area in which he began his education and continues to contribute positively to his surrounding community.

Dr. Sabbagh-Fard or Dr. Arash as his patients often refer to him understands that in order to be a great clinician one needs to continuously expand his knowledge base, he does this by frequently attending many courses and lectures focusing on cutting edge dentistry and the latest developments in oral care. He has a lending ear and a compassionate heart that makes him stand out as an outstanding clinician and a person.

Dr. Arash combines the many different components of general dentistry to achieve his patient’s desired results. His focus is on personalized treatment plans and a real one on one individualistic approach towards a mutual goal. His main area of interest is Aesthetic and Reconstructive Dentistry which includes but is not limited to the placements of Implants Bridges and Crowns.

Dr. Arash takes special care in the crafting and construction of his patients’ crowns to assure the closest match to their real teeth. This enhances the natural appearance of the porcelain and allows for a more natural look. Dr. Arash has also received numerous compliments and praise from his patients regarding his placement of implants, the construction of its crown and the overall patient experience. Needless to say his patients know they are in good hands.